CREAM OF THE CROP: Yamaha XT550 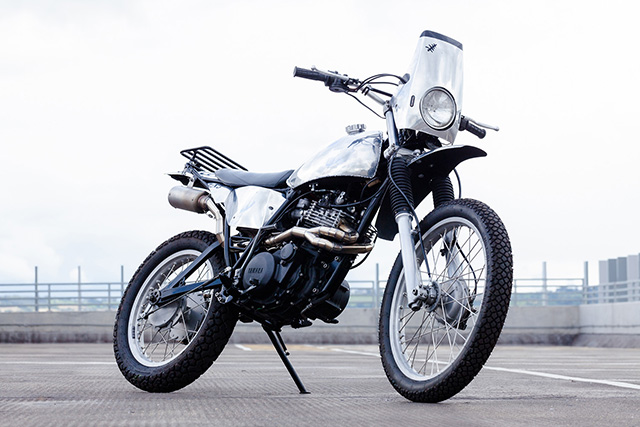 Wherever in the world you go, it’s not long before you find a kindred spirit who shares a love for motorcycles; it’s a truly universal language. But while that passion burns deep across the globe, nowhere is it so heavily ingrained in the national psyche than in the home of road racing, Northern Ireland. So it should come as no surprise that Chris Martin of Belfast got his first bike from his Granny when he was just a wee boy, went to the races with his Dad and now has turned his attention to hand shaping metal and building custom creations. His latest, a Yamaha XT550 will hoon up any hill, haul along on any highway and looks mega doing it. 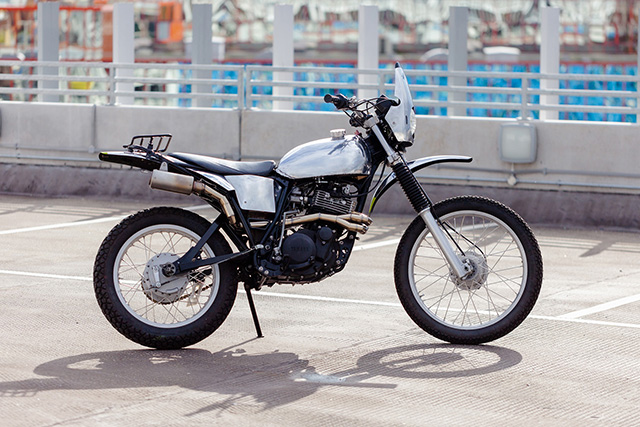 “I’ve had a passion for motorcycles since I was given a hand me down Honda Chaly from my Granny when I was 7, I rode it in the field behind her house as often as possible,” Chris tells us. The love of two wheels was one shared with his Dad, attending the classic bike shows and sitting on grass banks watching the road racing. For a while, skateboarding took over, but when his Dad passed away in 2009, the Suzuki GT250 he inherited needed some work and the bug bit again. After the little ‘Zuk, things progressed to a BMW R80 that was beautifully transformed, aided by his graphic design background. 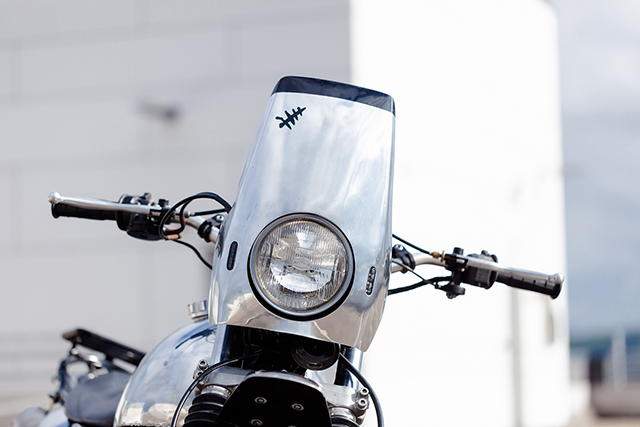 But like with any addiction things began to spiral and not content with bolting on bits, Chris bought a cheap English Wheel and started shaping parts. So good were the results, his XS Yamaha with hand made fairings and cowl was accepted into the Bike Shed Show. But it was on a return ride on his BMW with mates from Belfast to London for the Malle Mile that the story of this Yamaha begins. Heading home with the hill climb on their mind, they stopped in at a motorcycle dealer that specialises in importing bikes from the US and with his friend Roger did a deal on the XT. 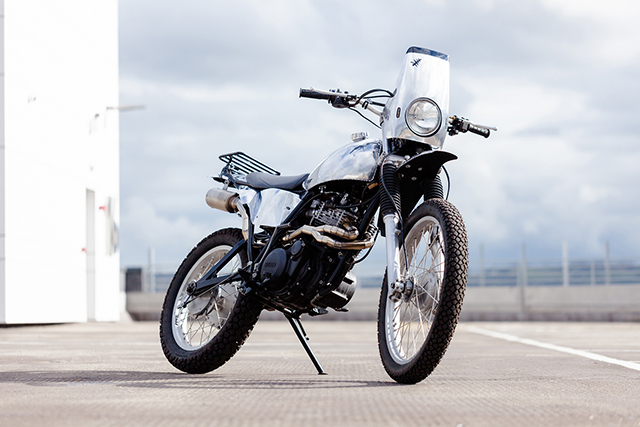 But when the bike had arrived, parts had been acquired and work started, Roger decided it wasn’t for him and with a gentleman’s agreement Chris took on the project solo. “The plan was for a modern looking enduro scrambler for touring but as if made by someone in the 1950s.” The bike had arrived not running nor import approved, but it did have a powder-coated frame in perfect condition and that would remain uncut. With the bike stripped down, Chris could work out which parts to keep, what to throw in the bin and exactly where he’d apply his metal shaping skills. 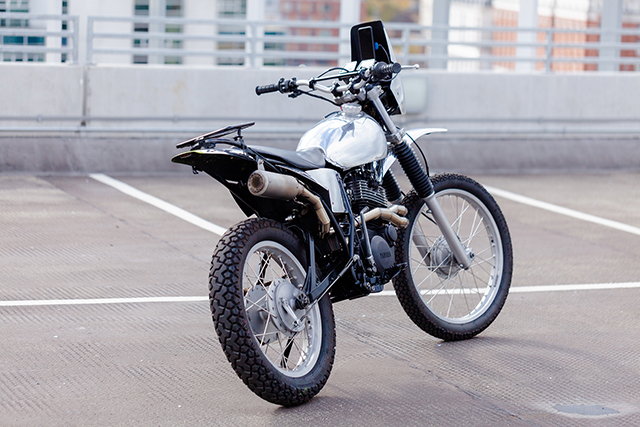 But wisely he chose to first get the engine running and it required a total overhaul to get it back into the sort of shape needed to cover endless miles. With many Yamaha spares acquired, the motor is treated to all new bearings, gaskets, and seals, with the head ported and polished before being bolted back down. To ensure reliability in even the worst conditions the stock airbox remains while the rebuilt carb draws air through a replacement K&N filter. Finally, a custom touch is added to unleash some extra ponies and bring the thumper to life with a custom exhaust running tight to the frame. 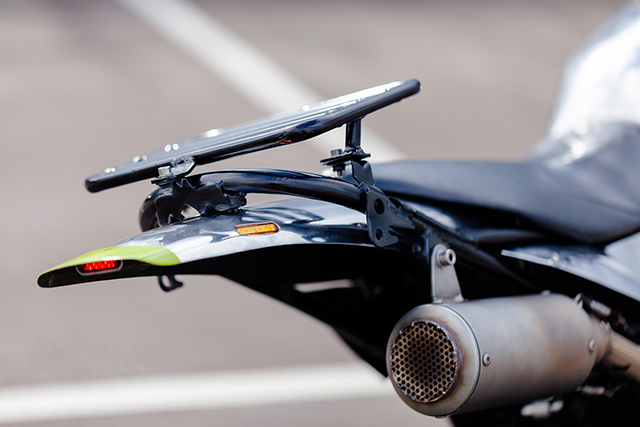 Putting the Yamaha back into rolling form the front suspension is brought back to its best and the single-shock rear replaced with a new unit from YSS. The front hub is an early TT600 unit that’s rebuilt like the rear with new EBC brakes shoes. These, like the stock rims, have been vapour blasted for a brilliant finish and then all laced together with stainless spokes. To find the right rubber, Chris looked to the king of go anywhere bikes, the BMW G/S and selected the Metzeler Enduro tyre that was developed with the big Bavarian. 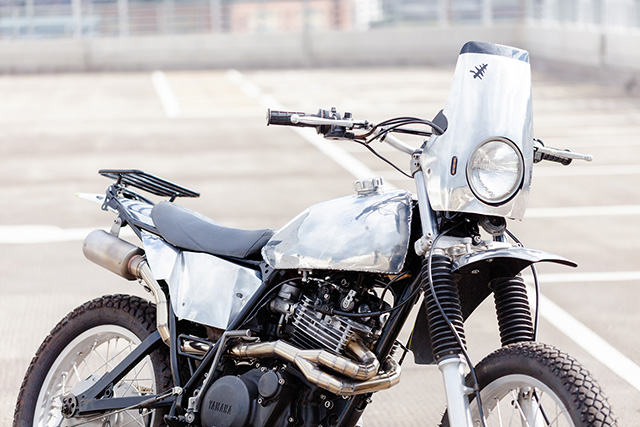 Now he could turn his attention to his new love, metal shaping and with a bigger English Wheel and quality Tig welder he set to work. “The tank style is based on the Yamaha XT500 but a bit bigger to take the rear shock through the centre, and I fabricated the rack to accommodate a large duffle bag or six pack of beer, whatever suits.” With the fenders and side covers continuing the theme and serving a very practical purpose. But it’s the front screen that gives the bike a Dakar like appearance and proves perfect for tucking in behind on the long highway stretches. Lights and LED indicators are brilliantly integrated, while a step back in time is preserved with original clocks restored to their 1980s best! 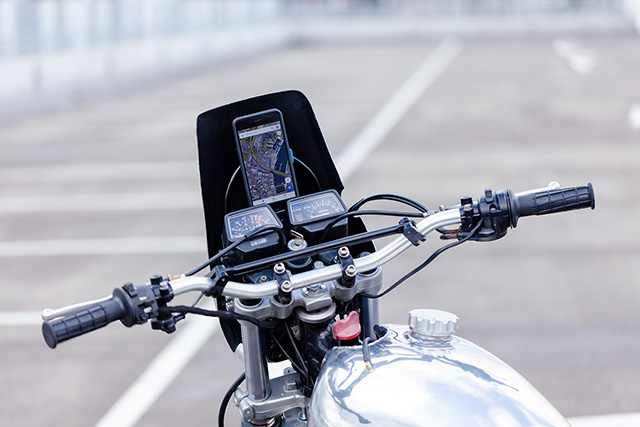 A set of alloy bars from Twenty and Chris’s own USB onboard charger and phone/GPS mount complete the build and he was ready to roll. For the ultimate shakedown run a friend joined him for the long ride from Belfast to Biarittz for Wheels and Waves. But while the small problems that surfaced with the XT were smoothed out, the other rider went high side and flew home leaving Chris to enjoy his finished steed, alone, on the roads and in absolute heaven! Now building a refrigerated sidecar for his R80, @ZombieGelato will become the home of customs and ice cream while @irishhareaeroworks is the place for all your metal shaping needs! 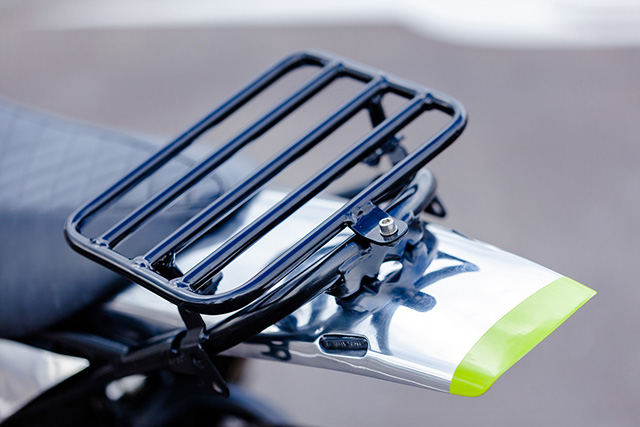 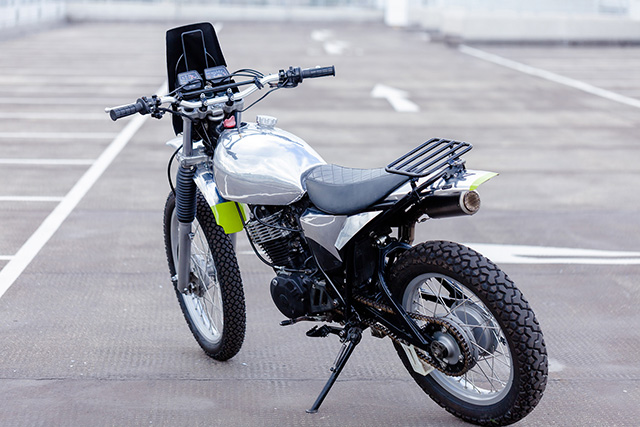 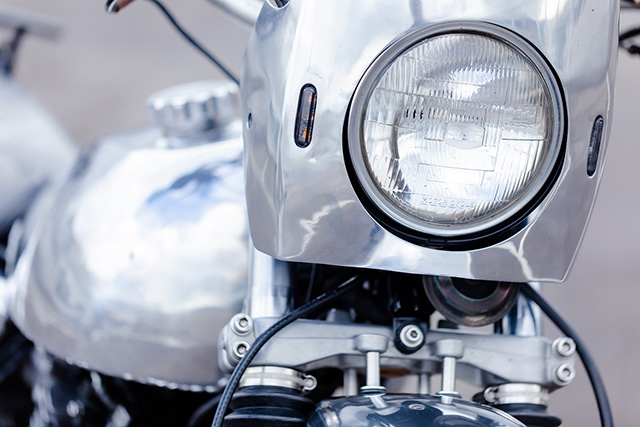 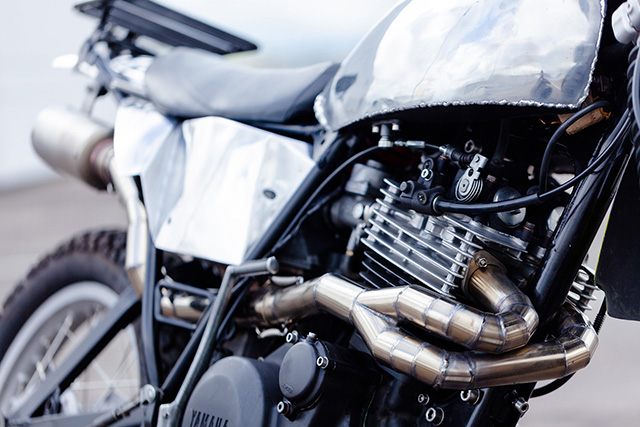 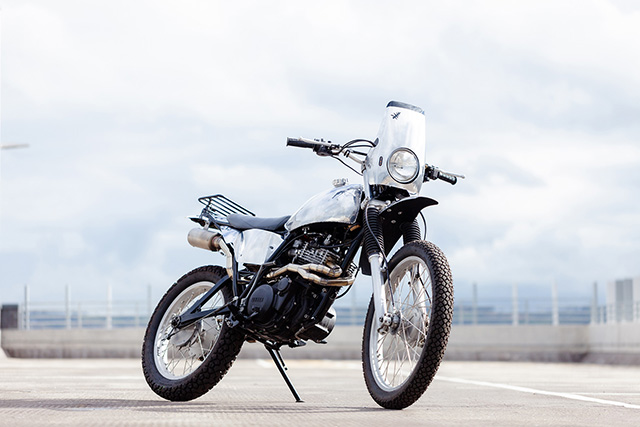 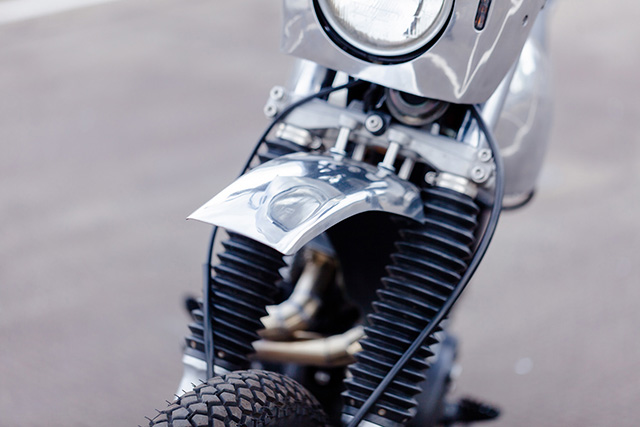 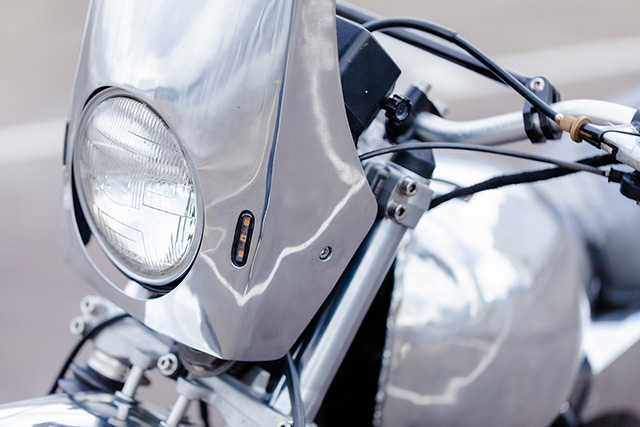 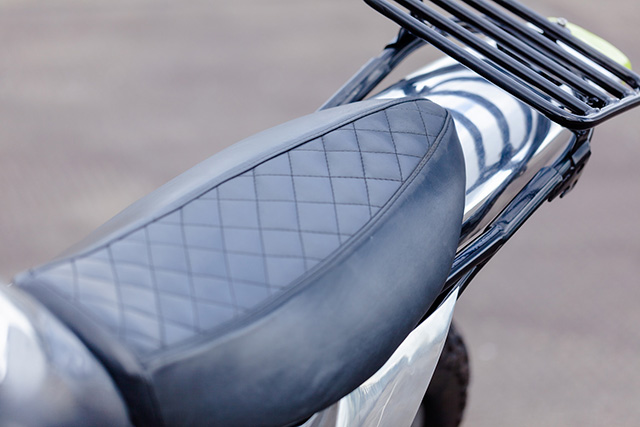 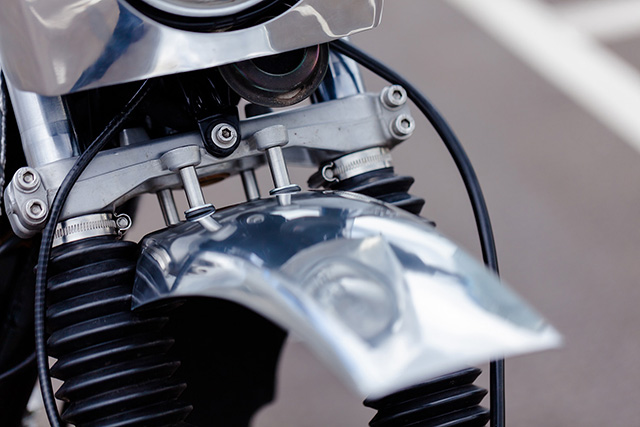 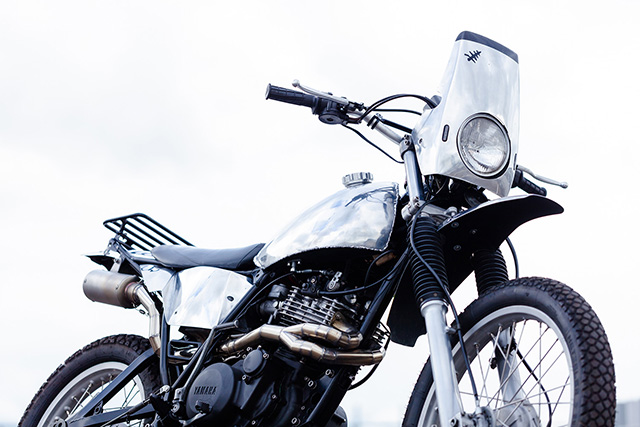