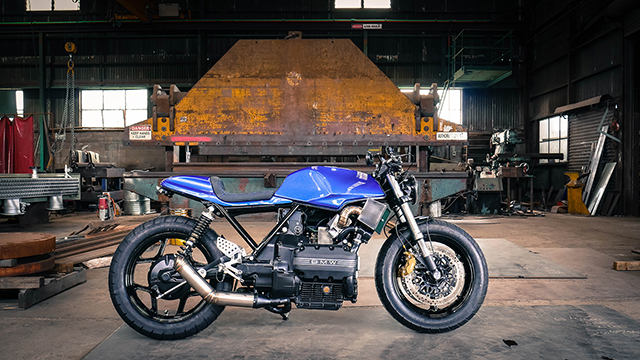 Building custom bikes means different things to different people. For some it’s a way to make a living, while for others it’s a means of blowing off steam and getting to unleash a little creativity upon the world. For Australia’s Jas Babalija, it’s very much the latter. The Melbourne-based bike enthusiast holds a number of largely clinical positions by day, leaving little to no room in his work life for any form of real self expression. 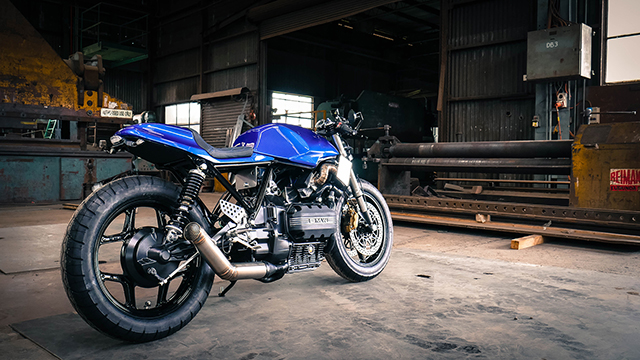 “Week in and week out, I work as a Consulting Mechanical Engineer / Forensic Engineer. This work involves investigating why things fail, mostly heavy vehicle and agricultural equipment related. I’m also involved in the homologation of  vehicles in Australia as an agent. The work’s quite technical, therefore working on custom bikes is the only creative outlet I have,” explains Jas. 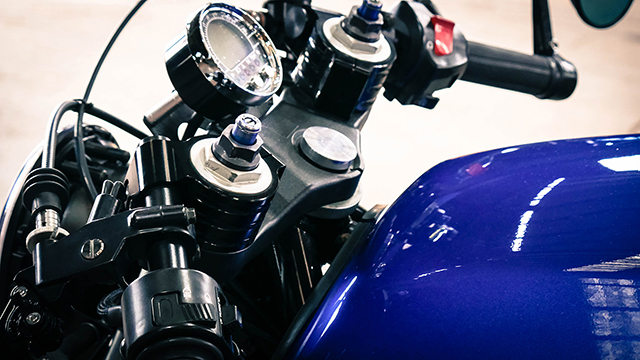 Though Jas had done some work on his own bikes in the past, the BMW marked his first full-on custom job. The engineer-by-day was joined by Dom Scarpari; a mechanic with three-decades of experience, the proprietor of a company that sells custom components for drift cars, and Jas’ soon-to-be father in-law. Like Jas, Dom had done a bit of work on his own rides but had never gone the full custom route — though you’d never know it from looking at the duo’s inaugural build, which is made all the more impressive by the fact it was completed in approximately two-month’s time. 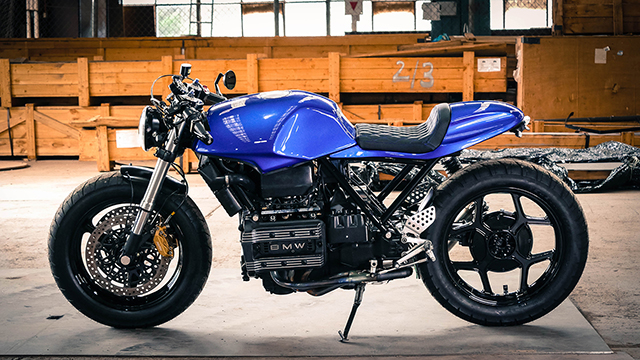 The project began as a BMW K75C that’d been wrecked. The forks were toast and the plastics were damaged, but a modern inverted front-end was already in the cards and the bodywork was slated to be pulled, so the crashed K ended up being the perfect donor for Jas and Dom, who are operating under the banner of JAX Garage. “As things progressed during the build he encouraged me to look at doing custom builds as a side project and that’s how all this got started,” Jas tells us. 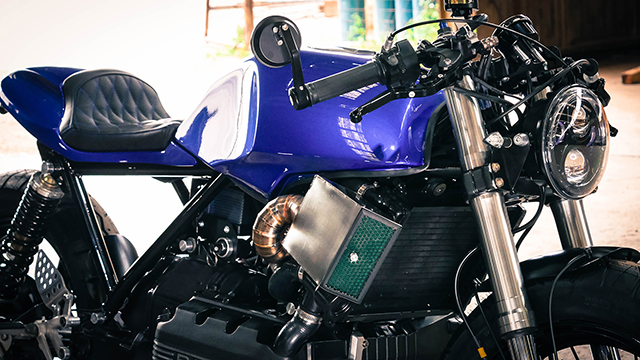 Before reaching the cylinder head, air now passes through a one-off pie-cut stainless steel intake manifold, meanwhile the German triple now roars via a custom exhaust setup ending in an over-sized GP-style pipe running horizontally before bending up 135-degrees and ending in a meshed straight cut. A custom over-flow canister was also made in-house and then stowed away beneath the tank. 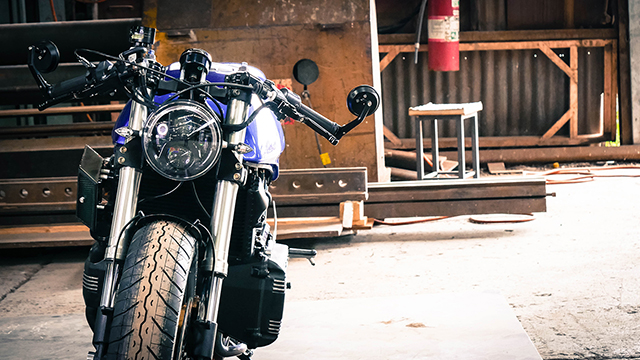 The mid-to-late ‘80s BMW’s original fork was yanked and an inverted unit off a CBR929RR was dropped into place. The Honda’s front-end also meant getting its dual-disc and Nissin caliper arrangement. GKTech provided the duo with a custom front brake reservoir and bespoke braided lines, as well. Small, one-off fenders add another dash of modern flavour to the mix, as does the 7-inch Stedi Carbon Black LED headlight – which rests in a custom bracket. 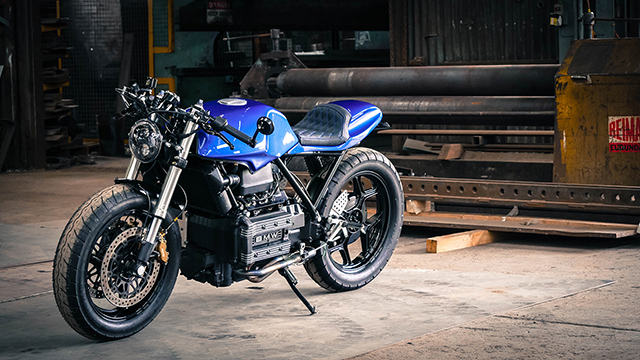 The 929 also gave up its rear-sets — the mounting of which required one-off brackets — and switchgear. The wiring was modified and the stock instrumentation was replaced with a new Acewell 2853 Speedometer. Beneath the seat Jas installed a lightweight Lithium-ion battery. 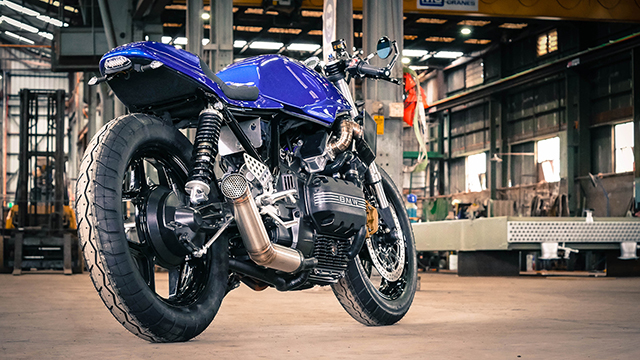 The subframe was shortened, the chassis was de-tabbed and cleaned up, and Jas and Dom whipped up a custom frame bolt dress-up kit to mask the stock bolts. The chassis, swing-arm, and wheels were then hit with a coat of high-gloss black and the powertrain, headlight shell, and fenders received a coat of satin black. The K75C’s original tank was stripped of its Roundels and then prepped for painting along with the build’s bespoke bodywork, then covered in BMW’s Estoril Blue. 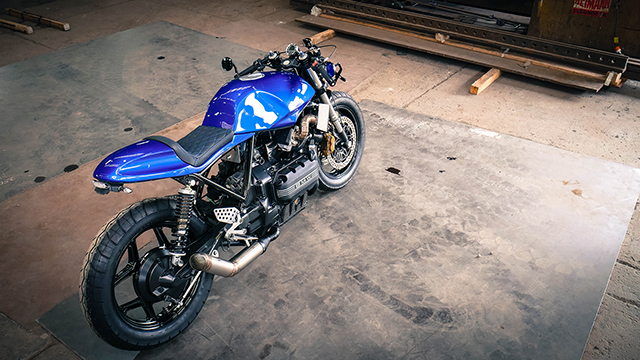 Sitting above the rear triangles is a custom fiberglass tail section; a contemporary take on the classic humped cafe tail that feeds into the back of the stock tank with a level of finish only rivaled by high-end factories. A black leather saddle with blue diamond stitching decorates the one-off tail, while an small LED taillight, micro LED indicators, and a tidy keep things both clutter-free and street-legal. 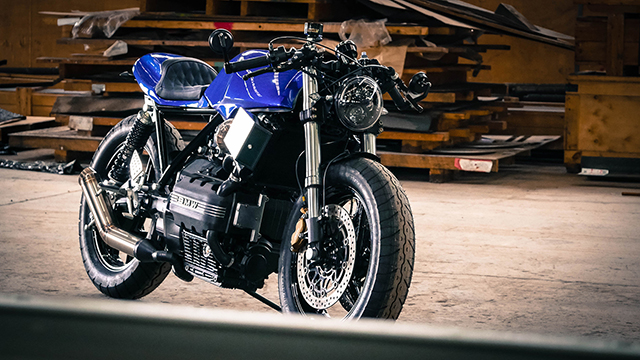 Together the pair have delivered a show-stopped of a K75C, with their talent on full display, along with the bike’s myriad of breathtaking one-off components. Based on the chops shown on their first build, we seriously can’t wait to see what the soon-to-be father and son in-laws cook up next.

“Dom’s experience and wisdom was the most crucial part of making this a successful build… and I’m not just saying that because I’ll be marrying his daughter in a few months’ time,” says Jas. 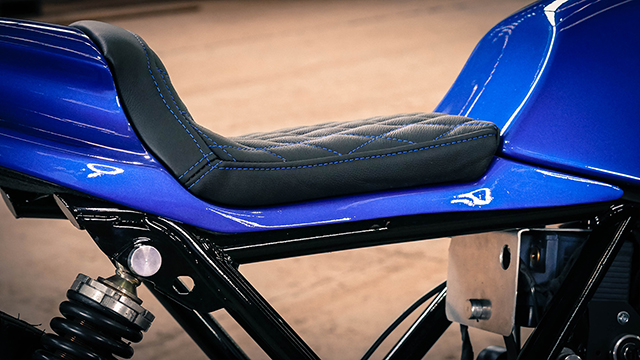 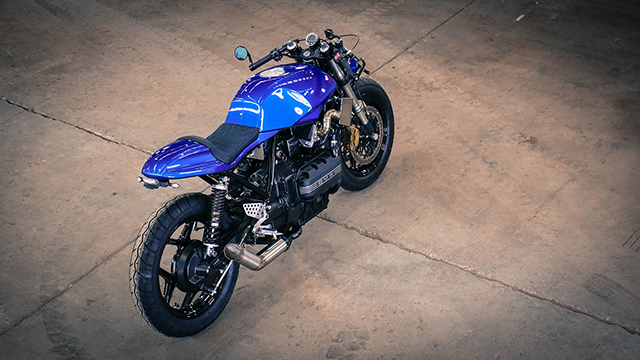 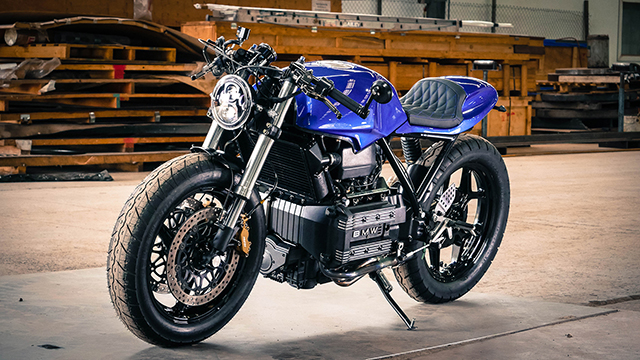 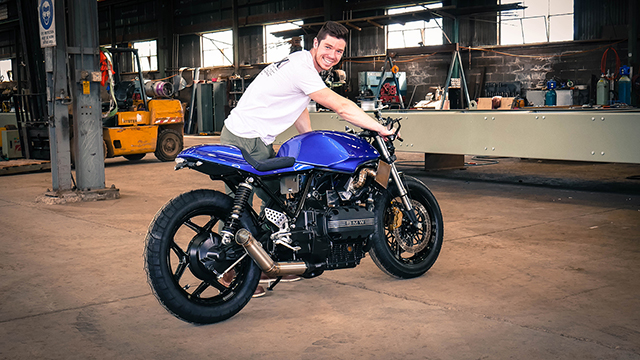 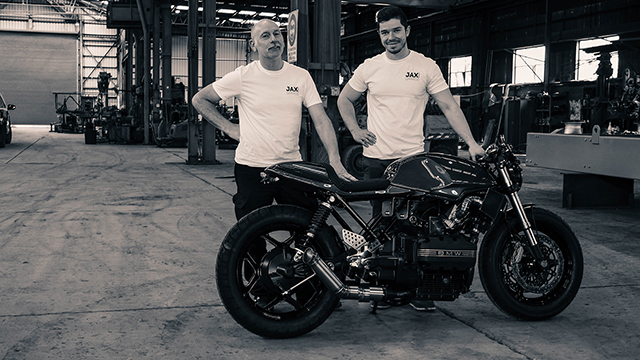