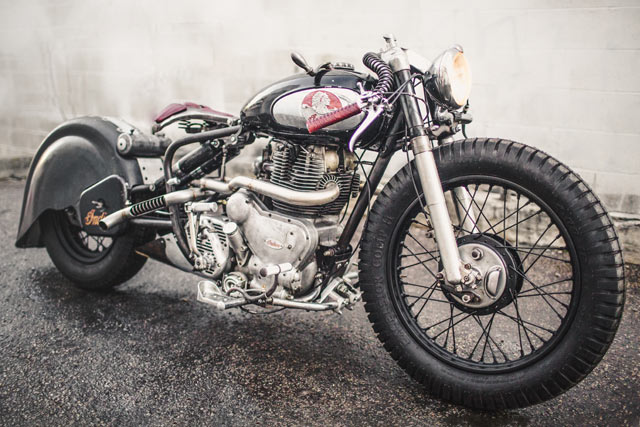 I have long thought that the original Mad Max is the best bike movie ever made. If you’ve never seen it, then do so immediately. And if you don’t agree with me, then clearly you are wrong. It’s pretty much perfect. Improving on it would be harder than climbing Everest in roller skates. But there is one thing I think just might up the ante on the original, and that’s setting it in a post-apocalyptic California in the late ’50s. And if you did, then Boston’s Madhouse Motors have just built the new movie’s star bike – their wild ‘Devil’s Advocate’ 1957 Indian bobber. 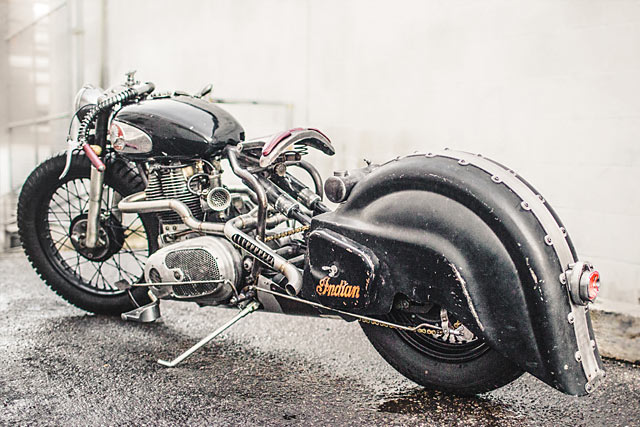 Speaking to us from the bitter cold of a hard Massachusetts winter, Madhouse’s main brain, J. Shia, talked us through all their latest news. “The shop is still chugging along and growing. We are going on our third year in our new building in Boston. We are kept busy with antique restorations this year, which I love having around the shop. Personally, I’ve been lucky enough to get a lot of weekends off to spend time in the woods with my son which really helps balance out the life in the shop.” 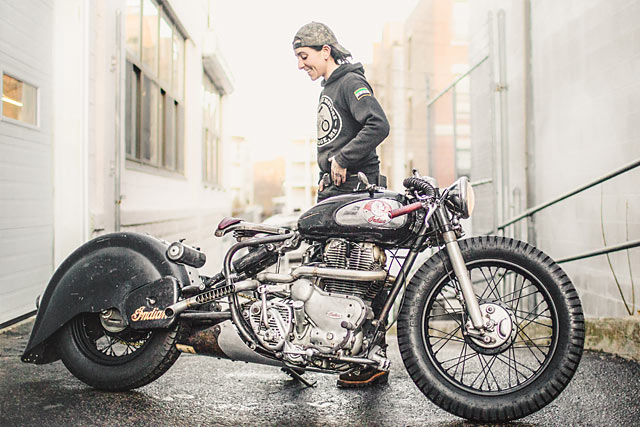 We asked J what on earth made her create a bike like this. “That’s pretty hard to answer. I was inspired by the pre and post WWII machines, English bobbers and old steam trains.” You had us a WWII, J. The donor bike was a ‘Royal Enfield Indian’ from 1957. At the time, Indian sold two 700cc models with Royal Enfield DNA: the ‘Trailblazer’ and the ‘Apache’. After the Indian factory in Springfield closed in 1953, the company started importing English Enfields and rebadged them as Indians to meet American demand. This is just such a bike. 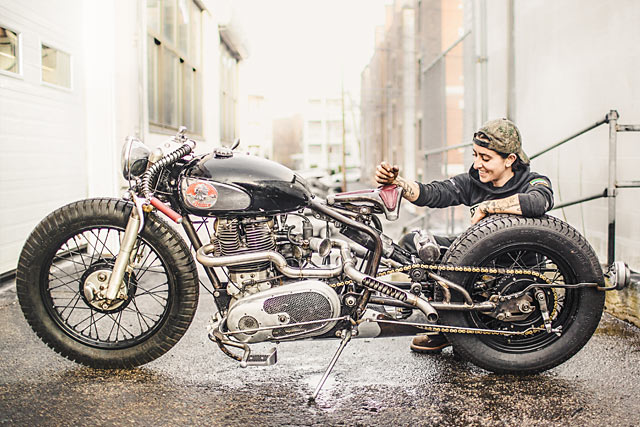 J and the Devil, sans fairing

“This bike was put into a friend’s basement in the 70’s. The basement was then renovated around the motorcycle, stranding it high and dry for 40 years or thereabouts. To get it out we had to carry it vertically up over a flight of crazy steep stairs.” That kind of makes your run-of-the-mill barn find bike seem a little dull, huh? 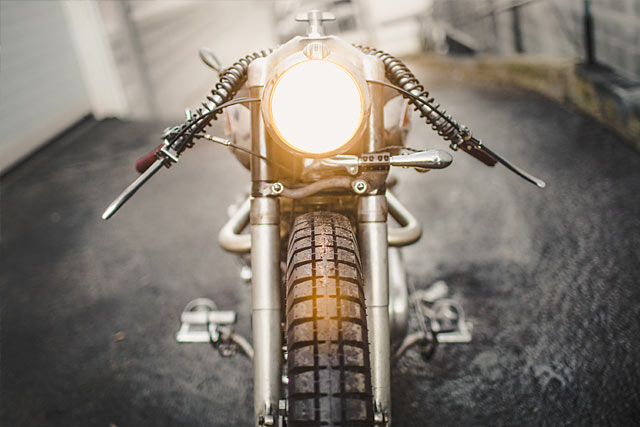 “I view her as older, dark and with worn-in features. She’s a lady who sits ands chain smokes on an old red leather chair.”

The creative spark for this bike stems from a narrative J had in her head since building her last project, an equally out-there BSA A65 with a pull start instead of the stock kick lever. “I viewed that build as a young, scrappy, British street fighting boy. This bike is his mother, whose character I felt I needed to let loose and create to honor the image I had brewing in my mind. I view her as older, dark and with worn-in features. She’s a lady who sits ands chain smokes on an old red leather chair while slowly turning her head as people walk by.” 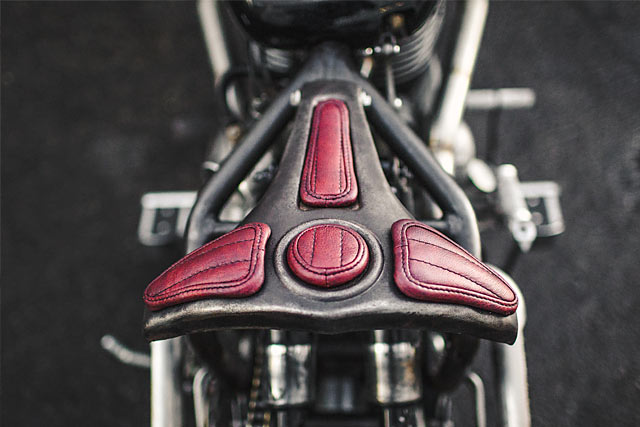 “The start of this project was from a handful of sketches I did after first seeing the bike in its stock form. Those sketches laid out the stance I was hoping to achieve. From there I set my mind to building a foot throttle and a hand shifter that ran through the tank. After the stance and performance concept was set we had to do a full top end, clutch and transmission rebuild. During this process I started to envision stretching the frame, and incorporating a ‘dual mono shock’ set-up. We then cut down the front end and triple tree.” 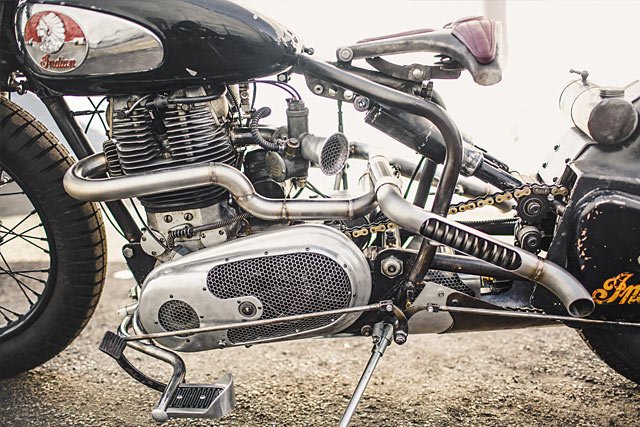 Check out that footrest. What an awesome idea

After the rolling chassis was completed, the tank was modified to accommodate the hand shift and the exhaust routing was laid out. J and the team began adding parts that compliment the general mood and character of the bike. The foot controls are made from a salvaged mini bike triple tree and handlebars. And as you can see in the above photo, they have used a ‘Brannock Device’ shoe fitting gadget as foot rests. And it just gets better from there. “The seat’s first life was as a little red wagon steering yoke. An egg slicer with LEDs is now the tail light. The headlight came from a modified police spot light and the tank shift lever came from an old lathe that is set into an adjustable housing inside the tank.” “The hardest part was creating a machine that I was so emotionally invested in. The amount of parts that were fully made, installed, then ended up needing revision was more than on any other project I’ve worked on. There had been parts that were made and functioned just fine, but didn’t compliment the bike as a whole. Putting my pride aside to start over was hard, but also extremely gratifying.” 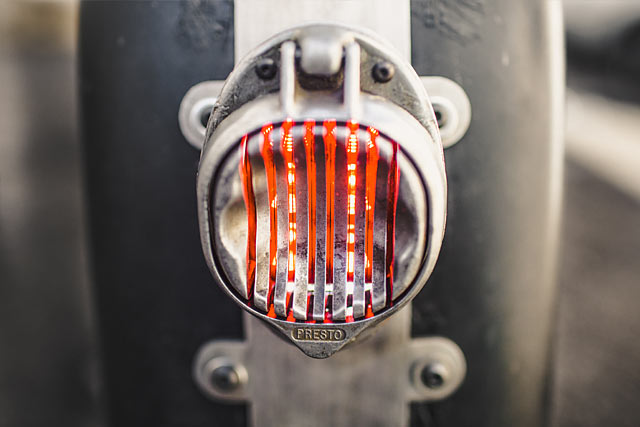 And J’s fondest memory from the build? “It’s the feeling of growth and community I get when looking at this bike. During this build, I reached out to multiple people who I look up to either as fabricators, machinist, mechanics or creative minds. They all contributed to this project in huge ways; either by giving me private lessons in precision welding, machining, brainstorming ideas or even being hands on. The collaboration of all these characters makes this bike what it is. And being able to work alongside so many people who helped bring this vision to life makes me proud of the communal side of Madhouse Motors.” 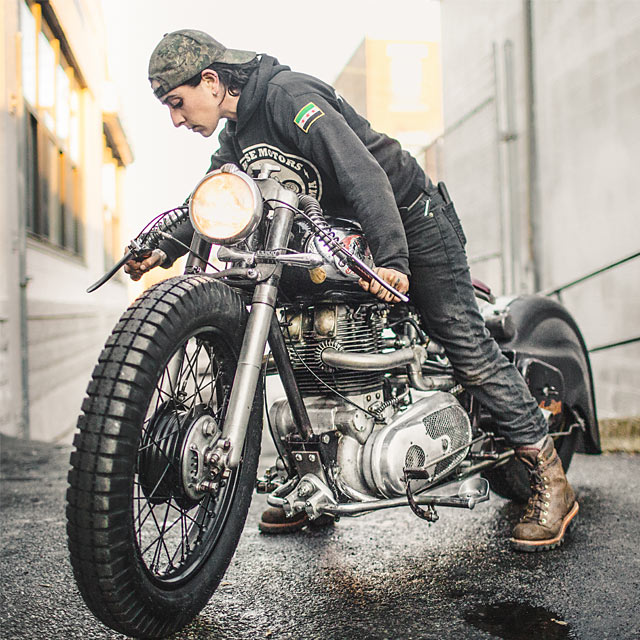