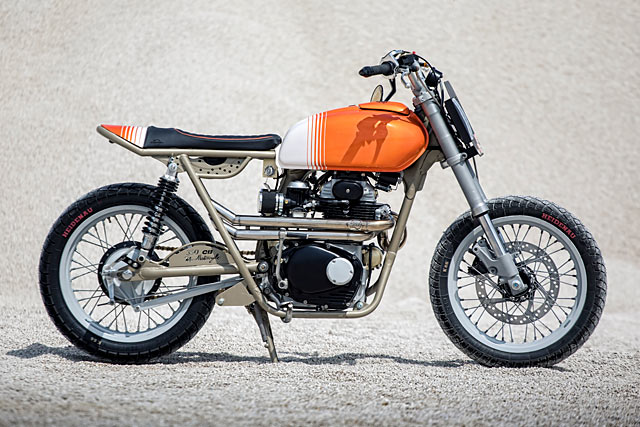 Once the seat of the Catholic Popes, the fortified city of Avignon in southern France is resplendent with stunning Roman and Gothic architecture; but it also has a rich motorsport history. The Circuit de Lédenon is nestled on the opposite bank of the Rhone and F1 legend Jean Alesi’s father once built Monte Carlo winning rally cars here. Now there is a new man in town, tucked away in a small workshop, Matthieu Volpi builds motorcycles to the most exacting of standards. His latest Volpi Motorcycle creation is this stunning 1972 Honda CB350 flat tracker, designed for the learner who wants it all. 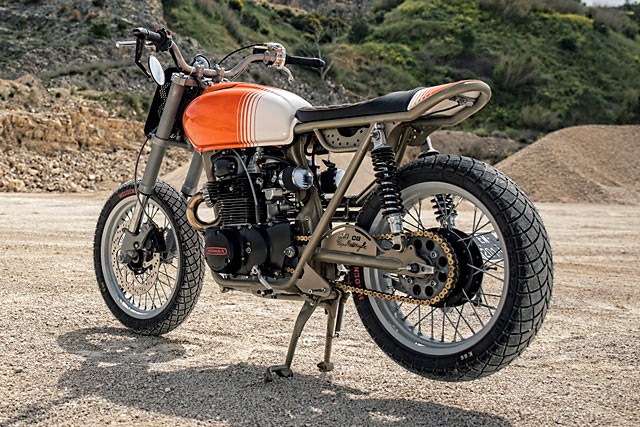 Over recent years such has Matthieu’s reputation grown that his small shop is bursting at the seams with customer’s bikes waiting their turn for his magical touch. Inside, everything from the latest BMW S1000RR superbikes to old school cool Kawasaki Z1’s line up to be next in the queue. But his passion is for the custom builds that also allow him to show off his creative flare as well as his meticulous mechanical nous. However for this project he had something unique in mind, a flat tracker for the road, built to a very high standard and for a very particular sector of the market. 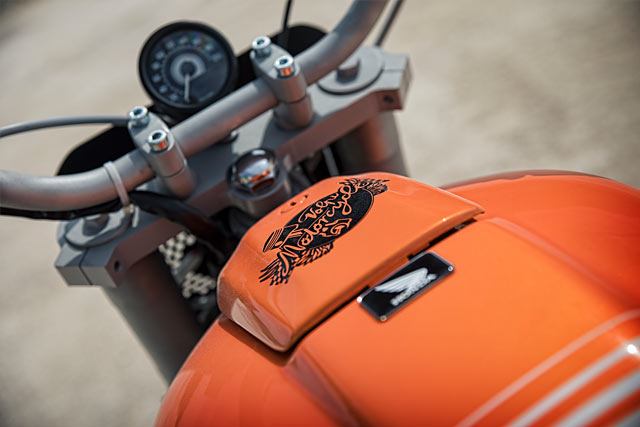 Like many European countries, France places a power limit of 47hp for new riders and Matthieu was looking for a bike that fit this criterion; who says learners can’t have cool bikes too. With his talent for building old Honda‘s the CB350 made perfect sense and he managed to track down a ’72 example, although she’d seen better days. But not to worry as once back at Volpi Motorcycle there wasn’t an inch that would be left untouched. The first order of business was stripping it down to a basic roller and getting to work on the frame. 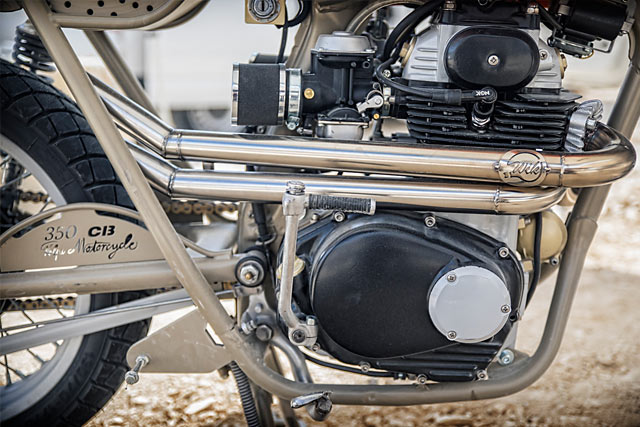 All the old rust, oil and grime was cleaned off before the whole chassis was ground smooth, excess tabs removed and imperfections filled. Then the grinder was whizzed into life and the entire rear subframe was cut off and slung to the floor. In its place a new, drastically improved piece was fabricated, with a neat up kick to support the seat to come. Extra bracing was added, new upper shock mounts affixed and then Matthieu constructed an integrated box to store the wiring neatly under the seat. The swingarm also gets some modifications with the heel guards built into the design with Volpi logos for good measure.

“Then the grinder was whizzed into life and the entire rear subframe was cut off and slung to the floor.” 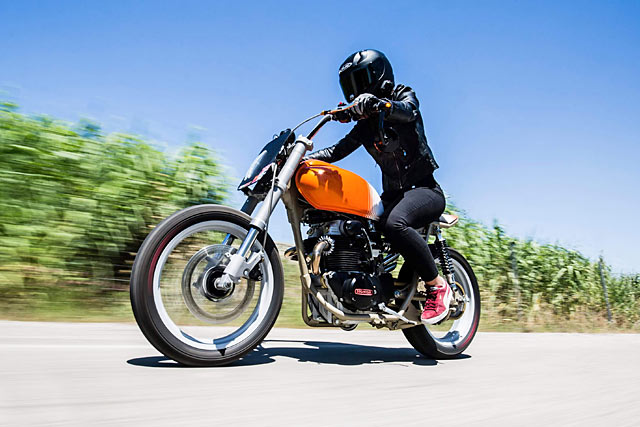 All this handiwork was then treated to a blast and a good coat of hard-wearing powder in a colour perfect for camouflaging days in the dirt. Now with the chassis back, it could be turned into a roller and swinging the back-end are a custom set of YSS shocks. But it’s up front where the extra effort went, the standard sticks are gone and in their place a pair of USD Suzuki RGV125 items have been adapted to fit. These of course were completely rebuilt back to factory specs and the modern caliper and drilled rotor supply superior stopping power. A Derby front hub makes the spoked conversion possible and both ends are wrapped up in Heidenau rubber. 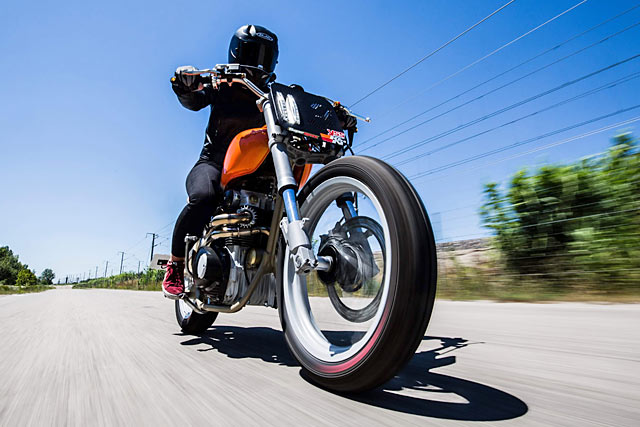 Now it was time to make the little CB look as good as the rest of the build and starting at the front the factory headlight has been ditched for a race board with twin LEDs serving as the headlights. The next changed required the moving of the ignition key to under the seat and then a later CB tank with fuller lines was massaged to fit. The tailpiece is simple but perfectly executed, giving the tracker look and a little more acreage to lay on the paint. The bright orange with white contrasting stripes is the perfect combination to capture a keen young eye and the seat gets the stitching to match. 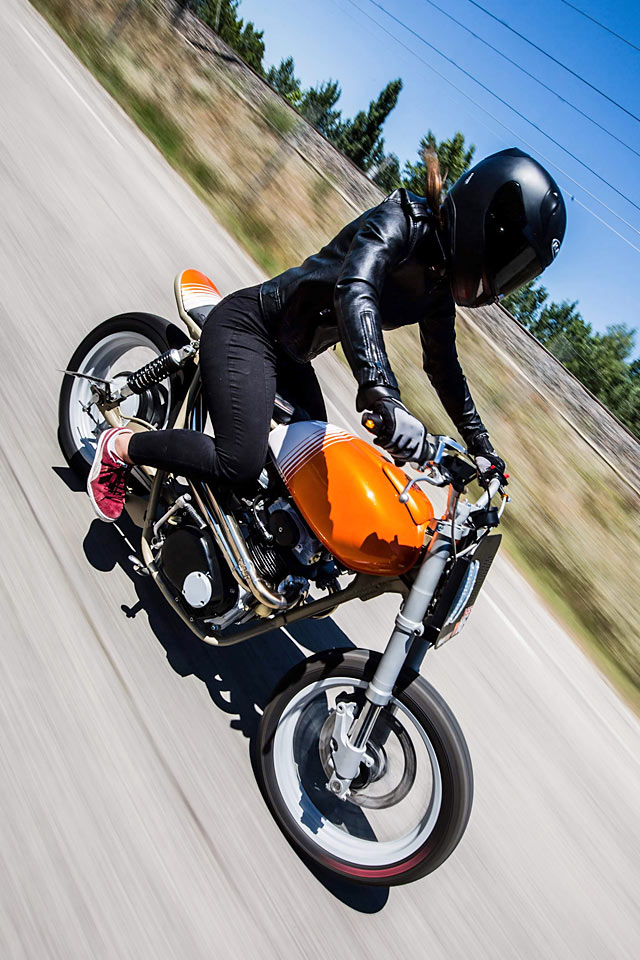 It can handle steep slopes, too

To say Matthieu takes engine building seriously is an understatement and he’s the man when it comes to old school carbies in the south of France. The little 325cc Honda twin might be a basic motor, but he’s assembled it with the dedication and care you would normally expect from a six-figure race engine. Every last component is stripped, blasted and repainted, every seal, gasket and bolt replaced and if a component isn’t perfect it doesn’t go back in. The gearbox had some excess play, so you guessed it, it too was torn down and rebuilt to factory specs. 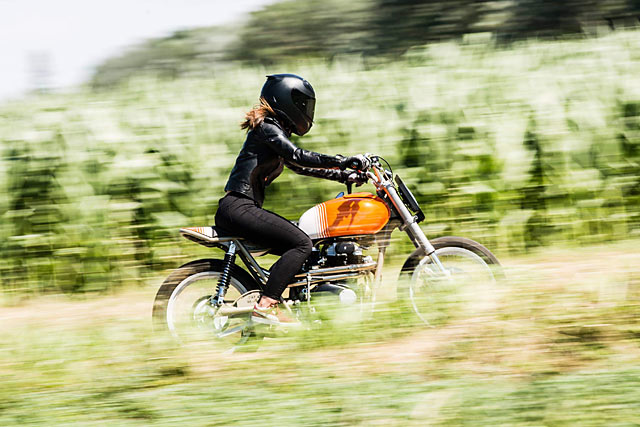 To get it all running again the old wiring would always prove a weak point and a handcrafted loom with new coil does the job. Even the electric starter motor is rebuilt with NOS parts and given the beauty treatment. Then it was over to the K4 carbs that are rebuilt to suit the other breathing mods to come and fitted up with foam filters that deal with the dust better than their mesh counterparts. The final piece to the engine puzzle is the stunning exhaust; the stainless tubes tuck tight to the engine and finish out with slash cuts to match the lines of the frame. 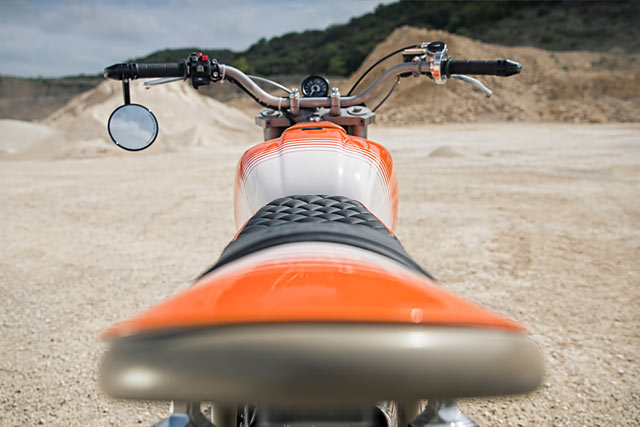 With a hell of a learner bike on his hands, the final details are all about making the bike practical for its young owner and to keep the French plod happy. New switchgear brings things into the 21st century, while a tiny little tail light and turn signals get the right registration approval. Volpi has even crafted a quick change front headlight and rear guard for when practical has to come before beauty. Now, wherever you look there isn’t a single part of the bike that hasn’t been touched and improved by Matthieu’s magic hand. But more importantly the hopped up and stripped down Honda is a blast to ride and one young Frenchman is leaving 2018 with a rooster tail of rocks in its eyes! 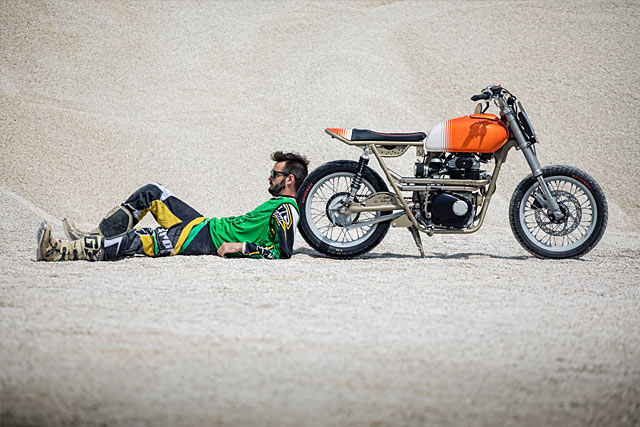 Old Hondas. What a pain in the neck